I learned to heal myself through 20 years of trial and error.

How did I Heal Myself?

I spent 10 years listening to doctors, including a full week being tested at the Mayo Clinic. The best that 20+ doctors could do is tell me that I should learn to live with the severe isolation and pain.

After 10 years of failure, I stopped relying on Western medicine. I decided to turn off my scientific reticence and try alternative healing modalities. I wanted to give it a chance because I wanted my life back, I wanted to see my friends again. I wanted to be Healthy, Happy and Free. 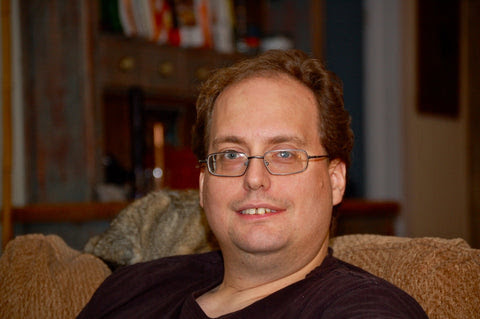 A photo of me from 2011, at my sickest I was around 40# heavier and could barely walk a mile without several days of exhaustion.

It was a trial and error approach with a lot of rabbit holes. When I found something that worked, I leaned into it. Then I’d hit diminishing returns, and move onto the next modality. My goal was “I want to be healthy, happy and free” and I made that my catechism.

The key for me was accepting that I had to heal myself, that no one else could do it for me.

When I found these techniques to be ineffective at healing my deep emotional and mental trauma, I dove into the spiritual side of things in an attempt to complete my healing and recovery.

Why Did I Pursue a Path of Spirituality?

Like Henry Rollins, I found that working through my physical and emotional and mental barriers wasn't enough. I needed a kick in the ass.

Henry went to India and stared down the eye of a poisonous snake:

I took mushrooms in the forest, and meditated on top of a sacred mountain in Japan with a massive whiskey hangover.

Six of one, 18 multidimensional constructs of the other.

Henry Rollins and I both learned that mature creative expression requires attempted mastery of our egos, borne on by our willpower and our drive to self-improve.

I was very sensitive to the world: chemicals, emotions, stress, all of the above.

Eventually I became so sick that I moved to live in isolation in the forest in chilly Northern Wisconsin for 4 years, where I spent time with the bears and deer and cute slinky ermin ... but not many people.

It was a very difficult time for me. My brain barely worked, I was in constant pain, my life was very difficult, and based on what my doctors told me I was entirely without hope for anything better. I became so sick that I nearly died several times; I didn’t expect that I’d live very long.

Healing myself was incredibly difficult and took focused willpower, because reprogramming my nervous system and limbic system was far from a linear curve. My healing process involved a lot of painful ups and downs.

Blog Post Excerpt from 2014: When Crawling is an Act of Courage

“Progress is not a linear curve, it is a slow and erratic climb. Change is difficult. It will require strength, bravery and hope.

Sometimes the hardest thing you can do is pick yourself up off the floor, and crawl a few inches.

Sometimes the bravest thing you can do is to is pick yourself up off the floor and crawl, after you’ve gotten knocked down for the fifteenth time in a row.

The moral arc of the universe does not bend towards justice or fairness, but it does brim with potential.

It is our task in this life to embrace that potential, to make the most of our time on Earth, and to be the most amazing person that we can be. Even if that means crawling.”

My healing process has helped me to understand myself much better, both my limitations and capabilities. Since I’ve been in a state of shock in some form for most of my life, this period of reflection has proven to be very beneficial for me. 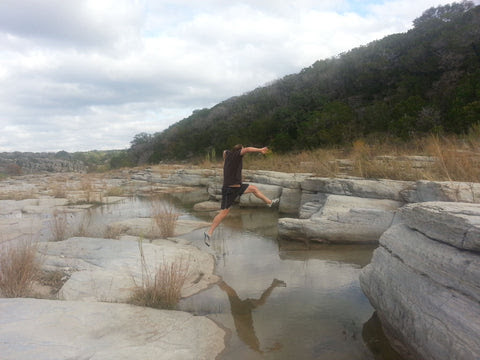 I’ve learned that operating in a healthy, harmonious, and low-chaos space is essential for me to thrive and reach peak efficiency. I’ve learned to lean into this, because life is a lot more fun when you’re in harmonious creative flow!

"I discovered the real value of my hypersensitive nervous system ... only when I ventured beyond the confines of civilization. The feelings that played through ... seemed less confined or bottled up and more a part of the general circulation between cedar trees, humans, woodpeckers, mountains, lizards, between cloudburts and streams studded with trout.

My porous nature seemed much less of a problem here. That permeability had always meant that I was too easily affected by other person -- by other nervous systems shaped so much like my own.

Yet such porosity was just right, I now realized, for engaging nervous systems very different from my own. It was just right for entering into felt relation with other, non-human forms of sentience."

-- Quote from Becoming Animal, An Earthly Cosmology, by David Abram

After I met Belinda 4 years ago and discovered how effective her hard-to-describe healing techniques were, we began developing Meliora together.

3 years ago, I traveled to Japan to explore. I didn't have much of an agenda, other than exploring a new neighborhood every day and eating lots of sushi.

While I was in Kyoto, my Airbnb host met me in the morning for tea to exchange some dollars for yen, and he walked me up to the train to Mount Kurama (he had no sympathy for my massive whiskey hangover).

I found profound healing there when I meditated on top of the mountain, it was well worth the hike!

This is what the guides handed me as I approached the mountain: 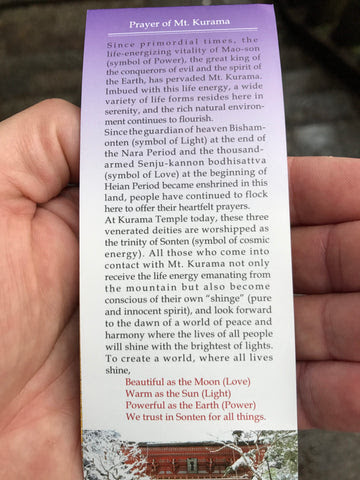 I really like that last part — to create a world where all lives shine.

This poem, and the sacred beauty of Mount Kurama in Japan, helped to inspire the development of Meliora.